When UWS began the roll out of iPads we changed a number of things in the unit and its delivery to incorporate and foster iPad use by students. Some things were simple – a change of lecture slides from PowerPoint to Keynote. Some more radical things like the use of iPads in exams. We love our iPads and smartphones so inevitably iMovies made an entrance in assignment two. For some the leap into film was easy and exciting. For others a step learning curve – but overwhelmingly we all found that the iPad/smartphone technology was amazingly capable of helping us all to deliver watchable results. Suddenly we were all Spielbergs (I wanted to be Peter Greenaway) producing remarkable footage.

Interesting to read of the spread of the use of the technology into the mainstream.
http://www.cultofmac.com/312536/modern-family-will-air-episode-shot-entirely-iphones-ipads/

So if they can film whole TV shows… What can we do? – let’s get out and start filming 😎 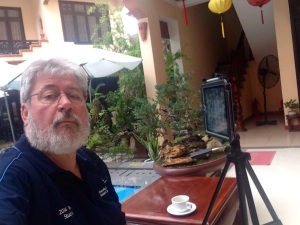 Spielberg I am not…